(202)365-5532 patanderson@nautilustrilogy.com
MORE REVIEWS
Pat Anderson has produced a well-researched chronological account of the world’s first peaceful use of nuclear energy. This picture-filled Nautilus Trilogy allows the reader to easily gain knowledge of the USS Nautilus from the laying of the keel to decommissioning. Included also is a less well-known part of Nautilus’ history, the political battle that eventually brought our Grand Lady home to Groton, Connecticut. Thankfully, she rests proudly at the pier of the Submarine Force Library and Museum – a national landmark everyone is welcome to experience.

Nautilus Trilogy provides a comprehensive and meticulously researched history of the world’s first nuclear submarine plus information never before available pertinent to Nautilus’ historic under-ice explorations. This is a unique book and the material presented is timeless and appropriate for all ages.

Pat Anderson’s book Nautilus Trilogy takes the reader on a wonderful walk through the history surrounding the birth of nuclear power and construction of USS Nautilus (SSN-571), the world’s first atomic submarine. Pat’s attention to detail and carefully researched newspaper articles, press releases, and other documents of the day give the reader a sense of being front and center for each major event and underscores the sacrifice and dedication of the nuclear pioneers on whose shoulders we stand today.

This is a history book about one thing: the USS Nautilus (SSN-571). Unlike the usual history book, Nautilus Trilogy is heavy on documents and light on narrative. The documents speak for themselves.

A book like this has been in my head since 2004, the year my late husband, Captain William R. Anderson, and I visited the Eisenhower Presidential Library in Abilene, Kansas. He was writing a second book about his 1958 under-ice explorations while commander of Nautilus. It was a top-secret mission personally authorized by President Eisenhower.

Quite frankly, my husband did not want to go to the Library as much as I did and I understood why. His memory remained keen to the day he died but he suffered from macular degeneration and it was very difficult and tiresome for him to read. Besides, we already had boxes and boxes of period material. What more did we need?

The bad mood disappeared when we began uncovering pertinent material previously unknown. We examined (by way of my eyes) folder after folder of letters, calendars, press releases, newspaper clippings, and memoranda produced by the men and women who worked in the White House fifty years earlier, some of whom he knew. By the end of the first day he wanted to find a really good restaurant and talk over our findings.

It’s a glorious day when your husband suggests such a treat and rare indeed when he admits (in so many words) that he was wrong and you were right. I do not remember where we ate but I will never forget the fun, excitement really, that Bill and I experienced literally turning the pages of history.

That experience led me to the idea of using period material to tell the Grand Era story of the USS Nautilus (SSN-571). I wanted the Nautilus Trilogy reader of any age to experience turning the pages of history. Moreover, telling the story in a highly graphic manner (with a separate focus on PANOPOs and the word “nautilus”) is something I thought might add a meaningful dimension to my husband’s books, Nautilus 90 North (1959) with Clay Blair and The Ice Diaries (2008) with Don Keith.

For years I did nothing. Early last year, I shared some of my thoughts with Wanda Sells, the supportive and energetic wife of James Sells (Nautilus 1963-1967), and the chair of the Nautilus Alumni Association’s 2018 reunion. Wanda took me seriously and suggested I contact her son, John, who grew up listening to Nautilus sea stories and had computer and graphic skills to boot.

One conversation with John and the ball began rolling. John and Dawn hauled themselves and lots of scanning, photographic, and computer equipment to meet me in Knoxville, Tennessee, home of University Libraries, University of Tennessee Knoxville,  and the permanent home of my husband’s artifacts, political and naval. Some weeks later, the entire Sells trio and I met at the Submarine Force Library and Museum, Groton, Connecticut, for four more days of scanning and photographing old documents.

Meanwhile, John Yuill and I discussed adding his wonderful, historically accurate Nautilus drawings to the mix. Suddenly, I had thousands of documents—enough material for several books. Enter Gary Zambrana, a family friend of 20 years. I begged his help and out of respect for my husband, for whom Gary had performed miracles on faded, wrinkled photographs, he agreed to immerse himself in documents and computer graphics to create Nautilus Trilogy.

One last note: The documents are the real thing, enhanced to improve readability. Long narratives were retyped, formatted for the book, and appropriate photographs inserted. Some documents were “rebuilt” to retain original look and feel. I have done my best to identify sources and photo credits.

I hope you enjoy Nautilus Trilogy. 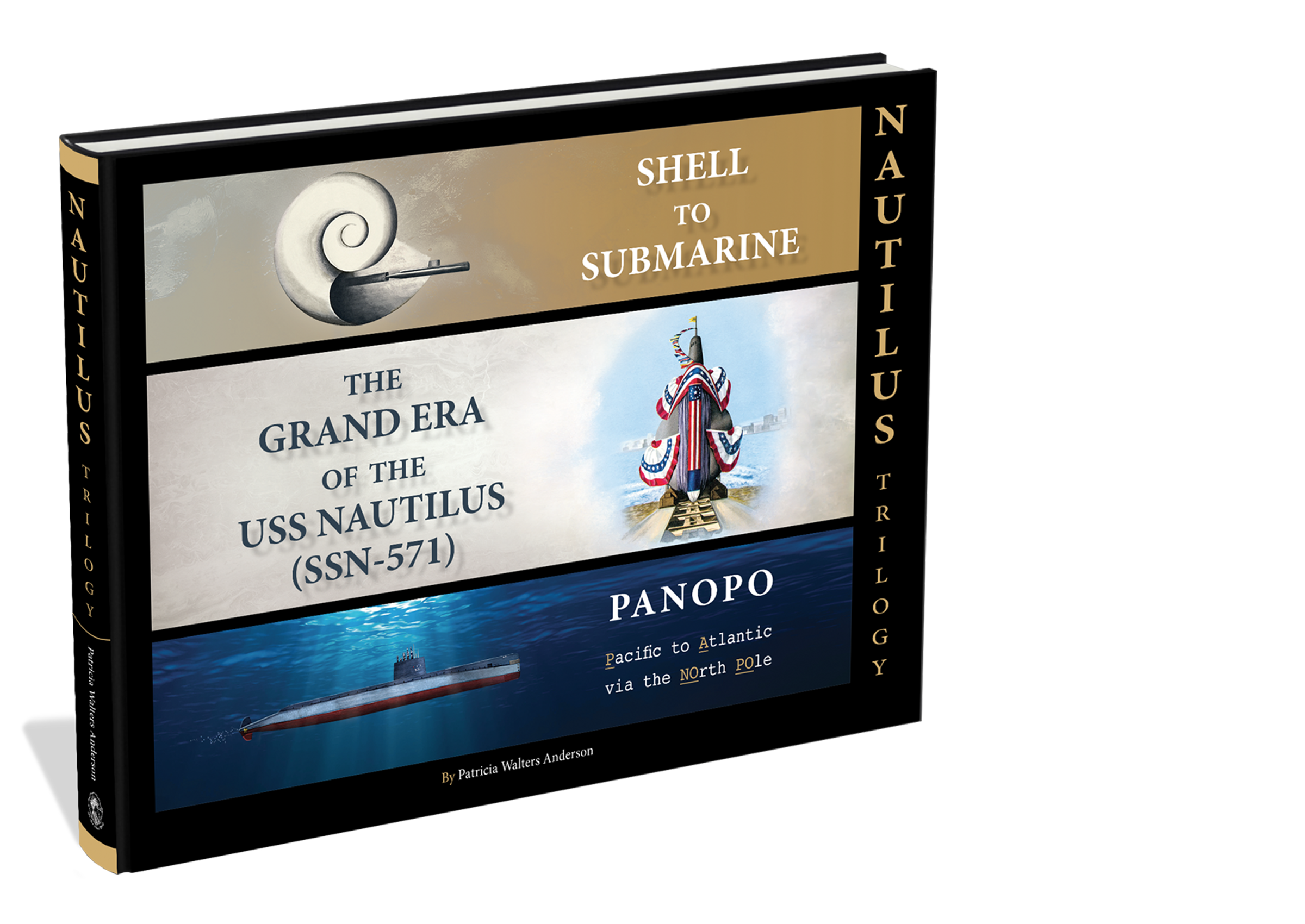 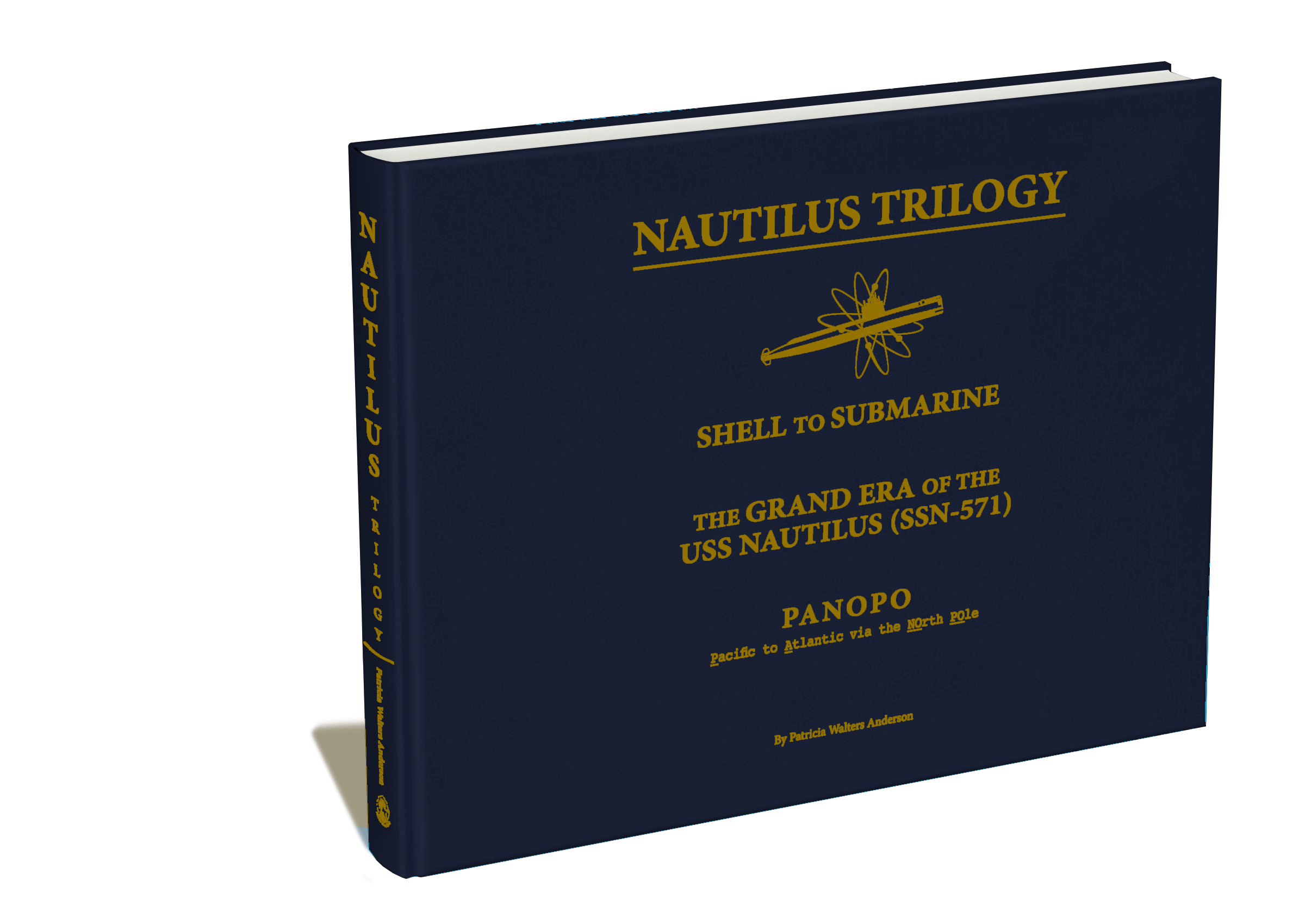 Underneath is navy blue hardcover,
with gold stamping. 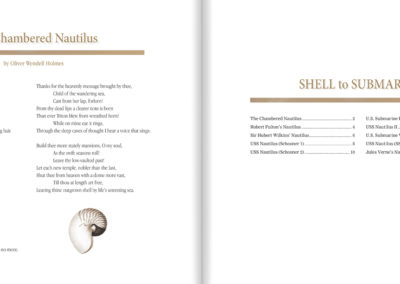 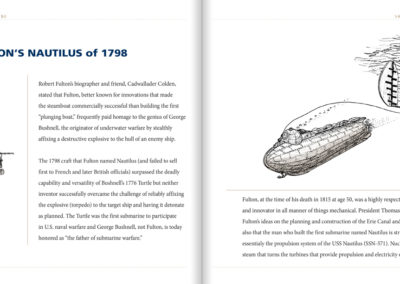 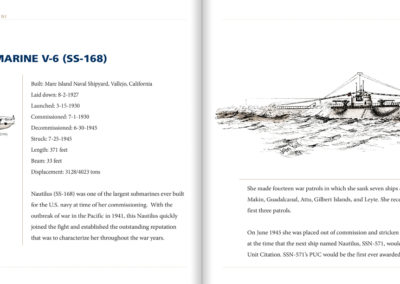 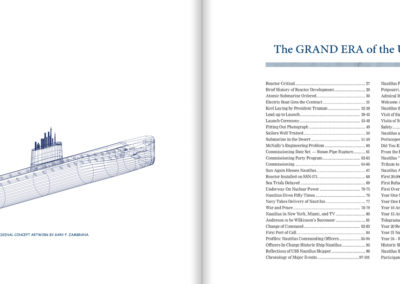 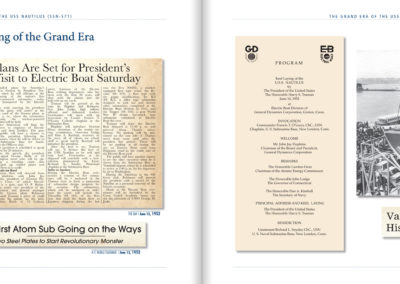 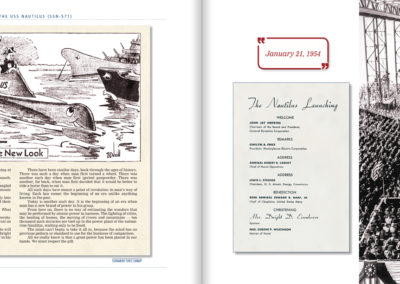 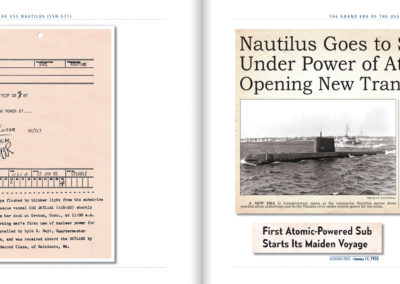 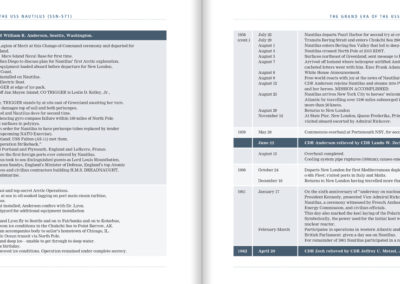 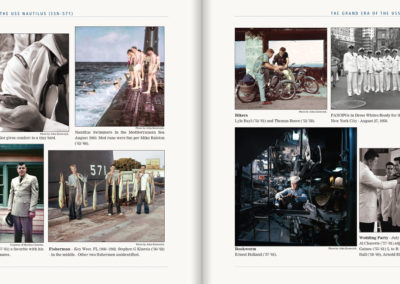 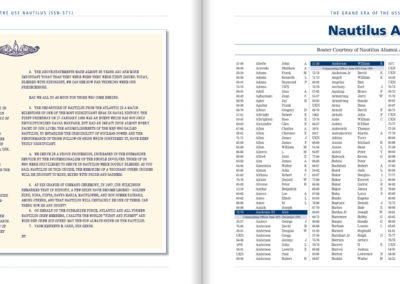 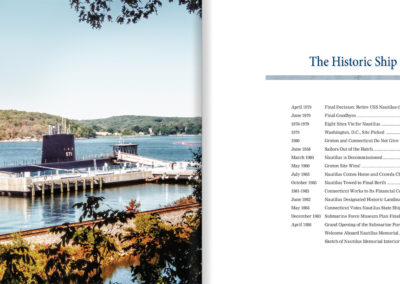 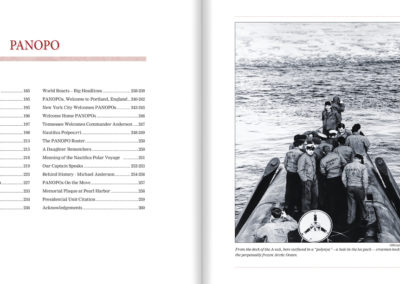 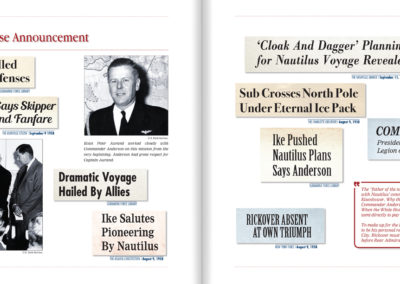 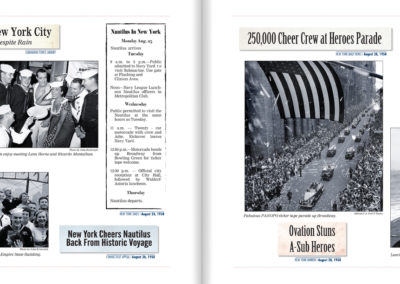 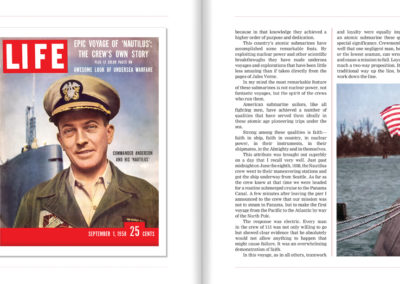 For over 31 years, until his death in 2007, Pat was the wife and business partner of Captain William R. Anderson, the commander of USS Nautilus (SSN-571) during the first under-ice explorations in 1957 as well as Nautilus’ historic top-secret mission to transit the Arctic Ocean from the Pacific to the Atlantic in 1958. They had two children, Jane and Thomas. Pat lives in McLean, Virginia, to be close to granddaughters Olivia and Evie. 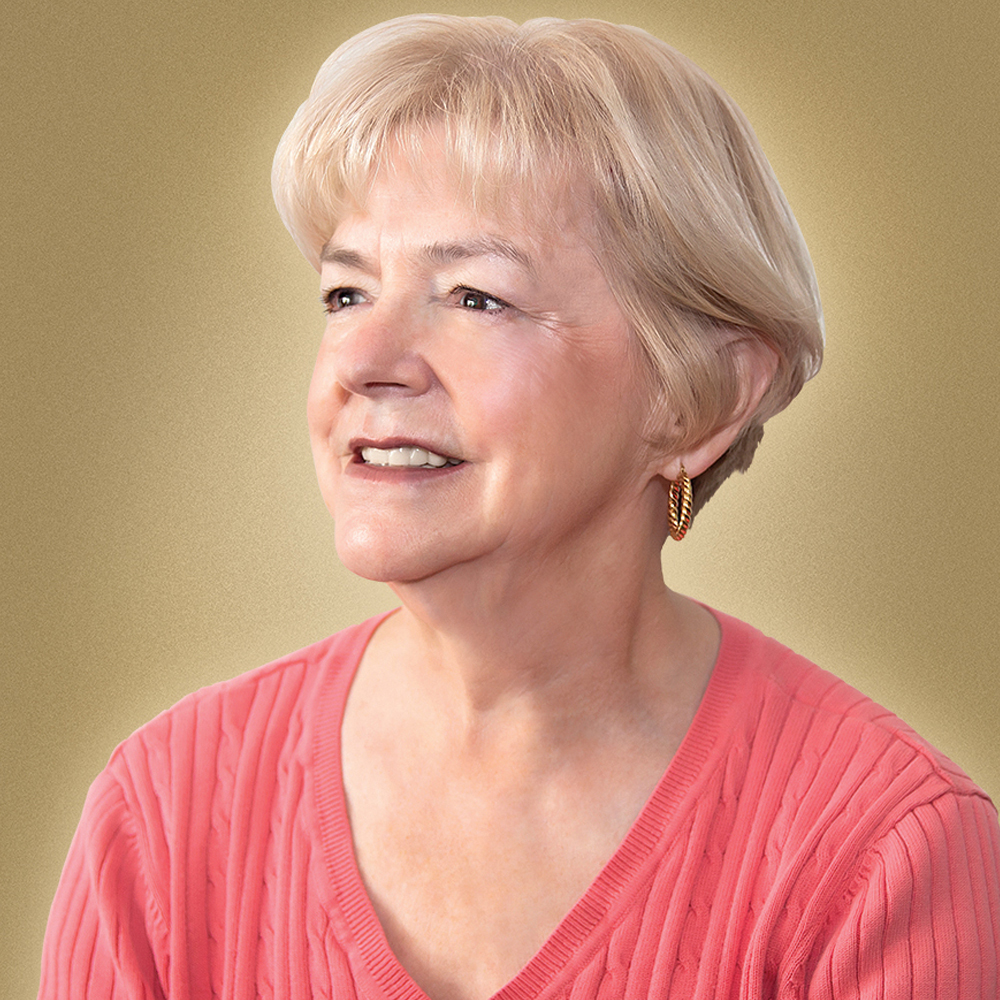